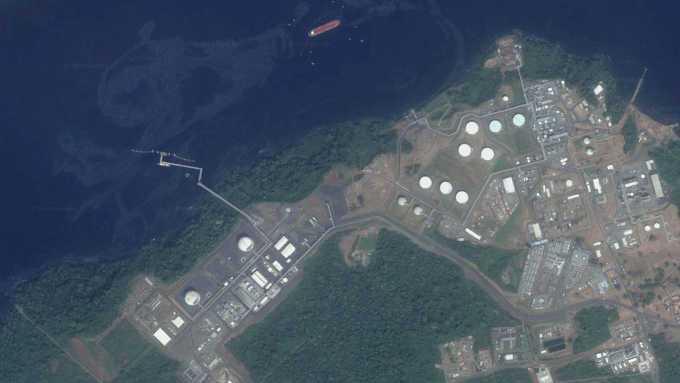 Equatorial Guinea is positioning itself as a hub for gas in the Gulf of Guinea and hopes to deliver where others have failed: developing the first successful cross-border gas venture on the continent.
Gas is a key priority for Equatorial Guinea and its neighbors. While Cameroon brought on stream Africa’s first Floating LNG project in 2018, Nigeria has declared 2020 the Year of Gas and both countries continue to push for the development of a gas-based economy. On its side, Equatorial Guinea launched Africa’s first offshore gas mega hub last year when it signed Definitive Agreements with Marathon Oil, Noble Energy, Atlas Petroleum, Glencore and Gunvor to process stranded gas from its Alen and Aseng gas fields, and offset production decline at the country’s Alba field.

The project is of strategic importance for Equatorial Guinea because the Alba field had been until now the sole supplier of gas to its Punta Europa complex, which feeds several industries including an LNG train and a methanol production unit, both seeking expansion. But such receiving infrastructure could also be a godsend for Nigeria and Cameroun who both have several stranded gas fields right across Equatorial Guinea’s maritime boundary and in need of off-take infrastructure.

The project is of strategic importance for Equatorial Guinea because the Alba field had been until now the sole supplier of gas to its Punta Europa complex
Equatorial Guinea’s vision for gas is simple: it wants to become that gas mega-hub for the sub-region by developing several offshore hubs to monetize neighboring gas reserves and develop downstream gas industries spurring industrial development and economic growth. At home, its industries need gas. EG LNG needs long-term gas supplies for its existing LNG export facility and is considering the development of a second LNG train. Meanwhile, the Atlantic Methanol Production Company has agreed to support the ongoing Year of Investment initiative by expanding its methanol production unit and diversify output into methanol derivatives. As demand for gas grows, Equatorial Guinea’s message to its neighbors is very straightforward: we provide the processing and off-take infrastructure, you provide the feedstock.

While similar projects have been developed in Africa before, they have fallen short of expectations. The West Africa Gas Pipeline for instance is the first regional natural gas transmission system on the continent, yet remains unable to deliver stable gas supplies to Benin, Togo and Ghana.

The gas mega hub Equatorial Guinea is developing in the Gulf of Guinea will have its own challenges. Nigeria does not belong to OHADA and operates under a different legal regime than that of Equatorial Guinea and Cameroon. The three countries also have different petroleum legislations, fiscal regimes and PSC terms. These are all factors that need to be addressed to turn vision into reality.

In a multilateral meeting in Malabo on Wednesday, H.E. Gabriel Mbaga Obiang Lima, Minister of Mines and Hydrocarbons of Equatorial Guinea, took a proactive step in creating an Executive Committee tasked with the acceleration of the progress of the gas mega hub. The team is also tasked with ensuring that gas be transported in and outside of the region. The meeting, which gathered Marathon Oil, EG LNG and state-owned entities like GEPetrol and Sonagas, sends a clear signal that a public-private partnership is in the making.

What is left to be seen is if Minister Obiang Lima can put a deal together to bring stranded, associated and even flared Nigerian gas to EG LNG on Bioko Island. The same will be said of the Etinde gas from Cameroon. Nigeria and Cameroon have enough gas, but its viable commercialization lies across the neighboring maritime border with a facility like EG LNG. Similarly, the ability of Nigerian Petroleum Resources Minister H.E Chief Timipre Sylva to make a deal work is key to the realization of Nigeria and Equatorial Guinea’s gas dreams.